Azerbaijani President Ilham Aliyev has attended the opening of the Gobustan Experimental Range of the State Agency for Alternative and Renewable Energy and Training Center within his trip to Gobustan region today.

The President viewed the center and commissioned it.

The Azerbaijani President also viewed the solar energy panels, located at a separate site and experimental plots of the center.

The President inspected the facilities used at the center, as well as samples of photoelectron panels. They are planned to be produced in Azerbaijan.

The President reviewed the experimental greenhouse.

After the landfill site was inspected, President Aliyev was informed that the lighting system and greenhouse work on alternative energy sources.

After the opening the Gobustan Experimental Range and the Training Center, the President met with public representatives of the region.

The photos were taken. 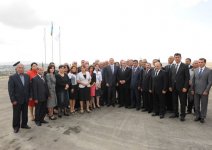