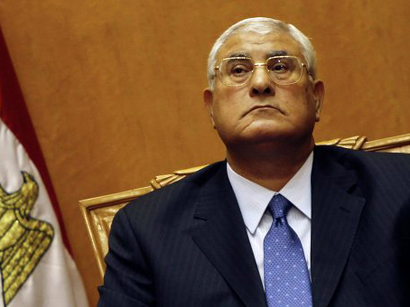 Interim President Adly Mansour called Monday for reconciliation among all Egyptians, shortly after two people were killed and 20 wounded during clashes in Cairo between supporters and opponents of ousted president Mohammed Morsi, dpa reported.

"We are seeking to open a new page for our nation's history," Mansour said in a televised speech on the anniversary of the 1952 Egyptian revolution.

Mansour took his oath on July 4, a day after president Mohamed Morsi, a member of the Muslim Brotherhood movement, was removed by the military amid mass protests seeking his ouster.

"It's high time to build a country that has reconciled with the past in order to build the future," Mansour said.

Mansour's speech came shortly after violence broke out when a group of pro-Morsi demonstrators approached Tahrir Square, where opponents of the toppled Islamist leader have been holding protests, the newspaper al-Ahram reported online.

The violence came hours after Morsi's family accused army chief Abdel Fattah al-Sissi of kidnapping the former president, who has not been seen since the military overthrow. Morsi's son, Osama, said the family did not know where he was and have been unable to communicate with him.

"We accuse al-Sissi and the group that supported the coup of kidnapping the citizen and the president, Mohammed Morsi," Osama told a press conference in Cairo.

He said the family would take legal action over his father's detention at a secret location and urged human rights groups to investigate.

Prosecutors said they were investigating complaints against Morsi - Egypt's first democratically elected president - and senior members of his Muslim Brotherhood in cases of spying, inciting violence and other charges.

The United States and the European Union have called on Egypt's interim leaders to release Morsi.

Morsi's supporters have been protesting in Cairo since his removal. They vow to continue protests until his reinstatement.