Turkey and Azerbaijan are the closest countries to each other and the closest allies, said Azerbaijan’s President Ilham Aliyev during a joint press conference with his Turkish counterpart Recep Tayyip Erdogan in Ankara on April 25.

“Dear Mr. President, dear ladies and gentlemen, first of all, I am very grateful to you, my dear brother, for the hospitality towards me and the delegation. As you said, following the presidential election, I paid my first visit to the brotherly country. This is natural. As you noted, this is a tradition and this tradition shows that today Turkey and Azerbaijan are the closest countries and the closest allies on a global scale. My dear brother was the first leader to congratulate me with the victory in the presidential election. The inauguration ceremony was held a week ago in Baku. The formation of the government was completed two days ago. Yesterday I already was in Ankara and we started meetings, and they continue today,” said President Aliyev.

President Aliyev noted that today’s ceremony, the discussions held yesterday and today once again show that the unity, brotherhood, the friendship between Turkey and Azerbaijan is strong and has great future.

“First of all, I would like to heartily congratulate my dear brother and the entire Turkish people with the success achieved. Turkey has come a great and honorable way thanks to the leadership of my dear brother. We, the people loving Turkey in Azerbaijan, are very glad to see the development in Turkey. The economic, political and social development of Turkey during Recep Tayyip Erdogan’s presidency makes us heartily glad,” said the head of state.

President Aliyev said that today Turkey is a power on a global scale and this power is getting greater and this makes the friends glad, and upsets ill-wishers.

“I am confident that Turkey will continue to go only towards victories and success. I would like to take this opportunity to invite my dear brother to pay his first visit to Azerbaijan after the election, so that this tradition would continue,” said the head of state.

“We are together in these issues. As I said, there are no other countries so close to each other. We are always together both in terms of roots, culture, history and common interests. There is no other country to support us in the Armenia-Azerbaijan Nagorno-Karabakh conflict as much as Turkey. Turkey is always with us and defends Azerbaijan’s just position in all international organizations. This support, solidarity gives us additional strength,” said President Aliyev.

The head of state noted that the Armenia-Azerbaijan Nagorno-Karabakh conflict should be resolved fairly in accordance with the norms and principles of the international law and on the basis of the UN Security Council resolutions, and Azerbaijan’s territorial integrity should be restored.

“Azerbaijan, for its part, always supports Turkey in all international organizations. Azerbaijan has shown its constant solidarity with Turkey in fighting terrorism and has said that it is always with Turkey. I congratulate the entire brotherly Turkish people for successfully conducting the Operation Olive Branch. Azerbaijani people have always shown solidarity in this issue as well. This is our common issue,” said the president.

President Aliyev noted that today Turkey and Azerbaijan are implementing major projects in the region with joint efforts.

“As my dear brother said, the Baku-Tbilisi-Kars and TANAP are historic projects. Our will, initiative and unity made these projects real. Today, we are drawing up the energy and transport map of Eurasia,” said the head of state.

“These projects increase our strength, make the regional cooperation stronger and ensure stability in the region. The initiatives and projects, which we are implementing jointly, do not only have an economic sense. They have a great political sense. These are the projects strengthening security and stability. I am sure that our joint projects will be completed successfully,” said President Aliyev.

The head of state went on to add that Azerbaijan and Turkey are increasing the mutual investment making.

“To date Azerbaijan has invested around $14 billion in Turkey’s economy, while Turkey has invested more than $12 billion in Azerbaijan’s economy. Only brotherly countries can make such amount of investments,” said President Aliyev. “The opening of TANAP and Star Refinery in the near future will even more increase our opportunities. I should also note that

the largest port of the Aegean Sea, the Petlim port, was built by using Azerbaijani investments. This is Turkey’s third largest port. We have come close to signing a preferential trade agreement. I hope this agreement will be signed in the near future and, thereby, the trade turnover will even more increase.”

“Turkey has a very developed defense industry. We meet our army’s needs with military products manufactured in Turkey as well. During the talks held today, we decided to further take steps in this sphere. We see that Turkey has a very developed defense industry and the manufactured products meet the highest standards,” said the head of state. “We are always together in all spheres – culture, education and humanitarian fields as well. We are bound by the ancient history. We are bound by recent history.”

President Aliyev noted that the country will mark the 100th anniversary of Azerbaijan Democratic Republic in May this year.

“After this, we will together mark the day of liberation of Baku from Armenian bandit groups by the Islamic Army of the Caucasus jointly with the army of Azerbaijan Democratic Republic. This is our glorious history. This history shows that we have always been together. We are together today and I am confident that we will always be together. I once again express gratitude to you, my dear brother, for the great attention and hospitality. I wish constant prosperity and progress to the brotherly Turkish people,” said President Aliyev. 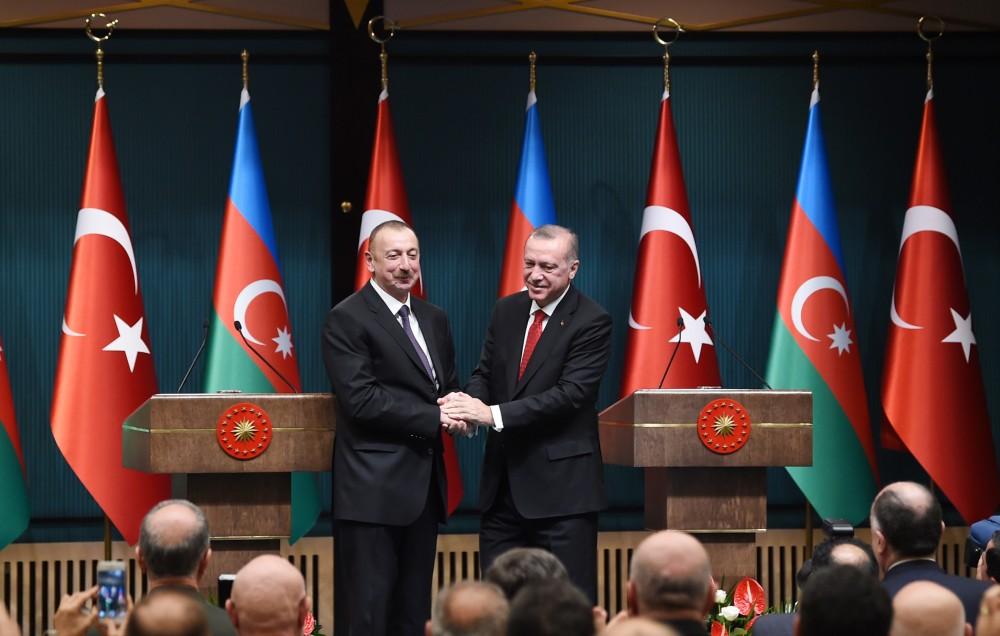