The event was attended by leading personnel of SOCAR, parliament members, heads of well-known Azerbaijani media, the teaching staff of the university and graduates.

First, the State Anthem of the Republic of Azerbaijan was played.

Opening the event with a keynote speech, Rector of Baku Higher Oil School Elmar Gasimov announced a minute of silence in memory of the shahids who gave their lives for the territorial integrity of Azerbaijan.

Then Elmar Gasimov congratulated the graduates and wished them success in their future life. The rector said that the university is preparing to celebrate its 10th anniversary.

“We are proud to be part of SOCAR. Today, our graduates are doing internships in Azerbaijan and around the world. Since the opening of BHOS until now, all graduates of our university, without exception, have been provided with work. They even work for international companies abroad. We are proud of them. In short, our students are the intellectual soldiers of Azerbaijan,” the rector said.

Elmar Gasimov noted that the goal of BHOS is to become one of the most prestigious universities in the world.

"If we reach the golden triangle of education, production and research, we will become one of the most prestigious universities in the world."

The rector stressed that the BHOS family is working hard to implement the idea of “Turning oil capital into human capital”, which was proclaimed by President Ilham Aliyev during his speech at the opening ceremony of Baku Higher Oil School.

"The successes achieved by teachers, students and graduates of the university are clear evidence of the realization of this idea."

Addressing the graduates, the rector said that each of them should honorably represent their country, government, university and family in the countries where they will go to study.

Speaking about the successes of BHOS graduates, President of SOCAR Rovnag Abdullayev said that the university has already become a brand.

“This is the result of your hard work. In 2006, Mr. President Ilham Aliyev set before us the task of becoming an international company. But then we had very few engineers and specialists of international level. We implemented scholarship programs and sent over 300 young people abroad to study engineering. But we could not be satisfied with this. Therefore, in 2011, Baku Higher Oil School was established by order of President Ilham Aliyev. Thus, we are achieving the goal of Mr. President - to turn oil capital into human capital. Azerbaijan is already training English-speaking engineers of international level,” Rovnag Abdullayev said.

In his speech, BHOS Professor, Honored Teacher Fuad Veliyev emphasized that he has always been proud of the students of the university.

“Students and graduates will be able to prove themselves at the new stage of their life thanks to the knowledge and skills acquired at BHOS. At this university, you have received a good education and become Azerbaijani intellectuals with high moral values. You will study and work in different parts of the world, but I am sure that you will forever remain loyal to BHOS and SOCAR for this. I have worked in various universities around the world, but nowhere have I seen so much care and attention shown to the student,” Fuad Veliyev added.

Recall that a few days ago, BHOS teachers won the “Yüksəliş” competition. During the event, the winners of the competition - Orkhan Guliyev, Ziya Mursalzade and Guldana Hidayatli - were invited to the stage, where Rector Elmar Gasimov presented them with gifts.

Then the graduates were solemnly awarded with diplomas.

The rector stressed that BHOS is the only higher educational institution in Azerbaijan where diplomas are awarded to all graduates on Graduate Day.

"This year we have remained true to our tradition."

Elmar Gasimov presented them with diplomas and plaques.

Then Safar Usubov, who became the first among the BHOS graduates of 2021, engraved his name on the symbolic tree stump.

Speaking at the event, the exemplary student wished everyone success and thanked the teachers. He noted that after completing his studies abroad, he will return to his homeland and will work as a highly qualified specialist.

“It is a great honor for me to speak here today. As a BHOS student, I did internships at well-known foreign companies. I have entered 12 US universities. We thank the rector Elmar Gasimov for the conditions created for us. My goal is to return home as a highly professional specialist and work for SOCAR at the Heydar Aliyev Refinery. We are the intellectual soldiers of the Supreme Commander-in-Chief! "

The Graduate Day continued with an artistic part dedicated to the historical victory of Azerbaijan in the Patriotic War.

People's Artist Ali Nur, father of Senior Lieutenant Rovshan Nurzade, who died during the Second Karabakh War, read a poem on the theme of patriotism.

Songs on patriotism performed by the Exemplary Orchestra of the State Border Service gave the guests a good mood.

At the end of the event, the robed graduates performed the traditional ritual of throwing their hats up. 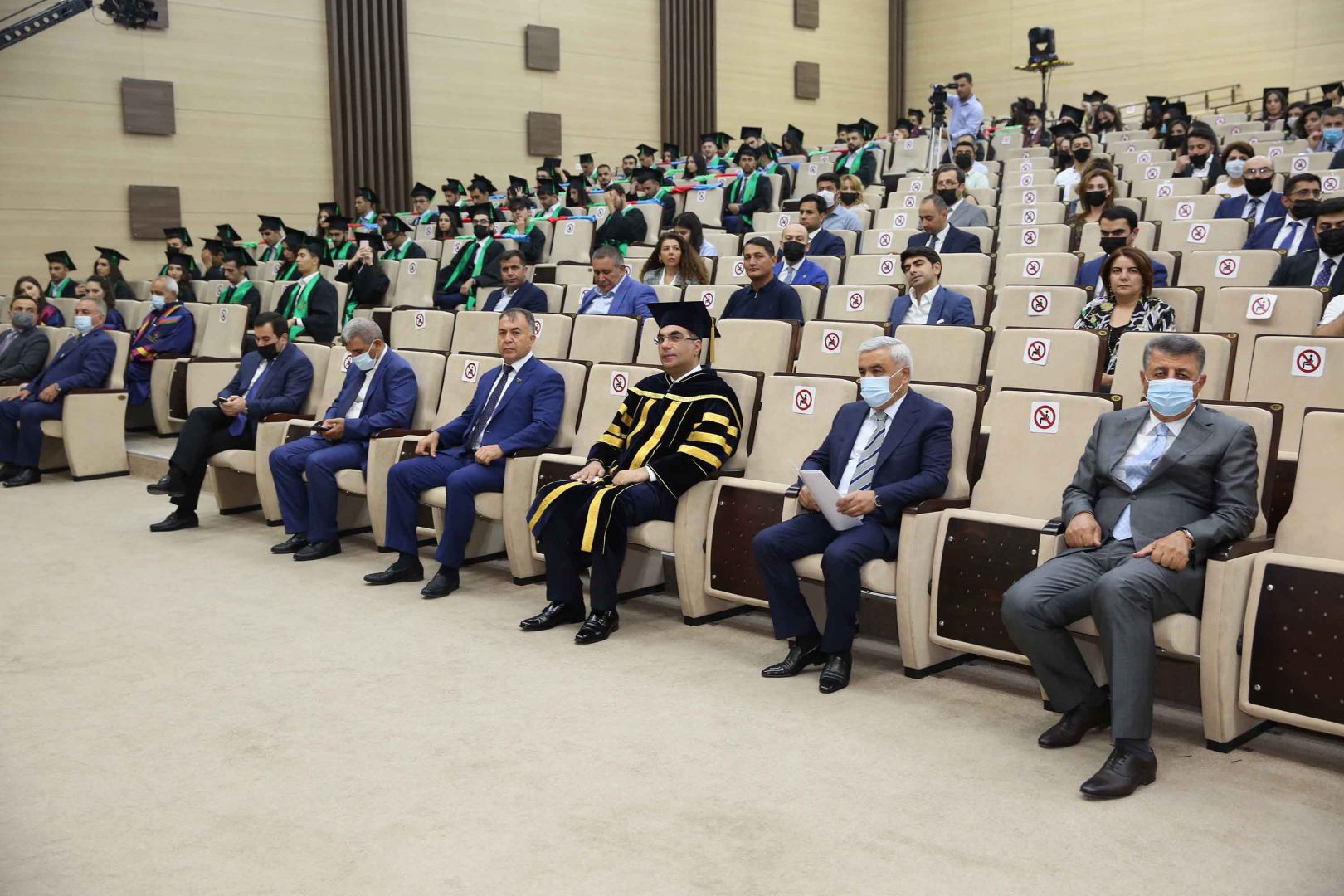 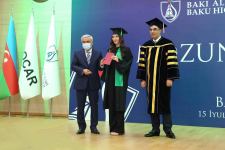