They stressed the importance of the contract signed today in Baku, particularly in terms of the bilateral cooperation. They noted that fruitful long-term cooperation between Azerbaijan and BP is based on mutual trust.

BP’s contribution as an active partner to realization of large-scale energy projects initiated by Azerbaijan was emphasized during the meeting.

President Ilham Aliyev said Robert Dudley was awarded Dostlug (Friendship) Order for his role in the development of successful cooperation between Azerbaijan and BP. The head of state presented the Order to the BP CEO. 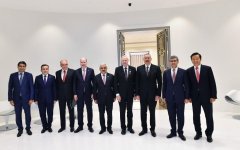