Units of Armenian Armed Forces resorted to provocation against Azerbaijan, trying to perform arson in the direction of Azerbaijan's Sadarak district, Trend reports citing the Azerbaijani Defense Ministry on Aug.25.

In recent days, the Armenian side, with the help of local media and foreign media sponsored by Armenians, has been spreading misinformation about the shelling of the border regions of the Nakhchivan Autonomous Republic, especially the village of Arazdayan, by Azerbaijani troops. Non-combat losses, especially suicides, in the Armenian army, the myth of the invincibility of which was destroyed by the 44-day Patriotic War and which is now in chaos, have been dispelled. To hide this, the Armenian side is trying to create a negative image of Azerbaijani army, spreading false information, and the situation is aggravated by shelling of Azerbaijani positions.

In the direction of Arazdayan-Sadarak on the Armenian-Azerbaijani state border, hostile provocations are being made against personnel, weapons and equipment, various methods are regularly used to inflict environmental damage on Azerbaijani territories. Azerbaijani units resolutely suppress these provocations of Armenia.

Taking pictures of the Armenian-Azerbaijani state border in the direction of Arazdayan-Sadarak, the ecological terror committed by the Armenian military, as well as the shelling of Azerbaijani positions has been witnessed. The fires started by Armenian vandals, who were unable to do anything useful for humanity, set fire to their positions. As it can be seen on the video, Azerbaijani soldiers extinguished the fire. The Azerbaijani side created conditions for extinguishing the fire. But a few days ago, while extinguishing the fires, the Armenians fired at the employees of the Ministry of Emergency Situations of the Nakhchivan Autonomous Republic, and one firefighter of the ministry was shot dead.

Armenia, which continues to misinform its people and the world community, spreads a lie that the road in the direction of Yerevan-Arazdayan-Kerki was also shelled. During the filming towards Arazdayan, it was observed that the road was in full working order.

During filming, several plainclothes men were seen walking between positions on the opposite side. If Azerbaijan allegedly breaks the ceasefire and opens the fire first, then why are the Armenian army soldiers acting so comfortably? Because the Armenian side is well aware that the Azerbaijani army has never opened fire first. Therefore, the Armenian command deliberately involves its servicemen in provocations on the front line in civilian clothes.

During the filming, it was seen that the conditions of hostilities are under the full control of special forces units, and provocations by Armenian vandals on the border with Nakhchivan are resolutely and will be prevented. 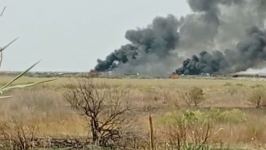