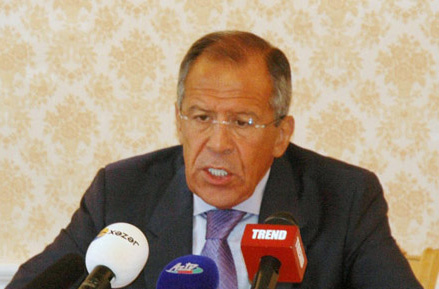 Presidents of Russia, Azerbaijan and Armenia, Vladimir Putin, Ilham Aliyev and Serzh Sargsyan have expressed commitment to the normalization of the situation on the line of contact and agreed to increase the number of OSCE observers, Russia’s Foreign Minister Sergei Lavrov told reporters.

“The sides outlined concrete steps towards intensifying the negotiation process and agreed on a trilateral declaration which confirms their commitment to the normalization of the situation on the line of contact and their consent to increase the OSCE observers working in the zone of conflict,” said Lavrov, RIA Novosti reported.

The sides also expressed commitment to creating conditions for ensuring sustainable progress in the talks on political settlement of the Nagorno-Karabakh conflict, he added.