President of the Republic of Azerbaijan Ilham Aliyev attended the opening of Sumgayit Seaside Boulevard and a city beach Sept. 27.

The president cut the ribbon symbolizing the opening of Seaside Boulevard and the city beach.

The president was informed that the boulevard, which stretches 4km along the Caspian Sea coast, occupies a total area of 106 hectares. The construction of the boulevard started last October.

A Flag Square was built on the boulevard, with the flagpole here standing 42 meters in height. Work carried out in the complex included the planting of 100,000 trees, more than 500,000 different rose bushes, creation of a lawn, which occupies an area of 60,000 square meters, installation of a modern lightening system, security cameras and monitors, construction of a water supply and sewage system and pedestrian zones.

The president was told that the beach occupies an area of 12 hectares. More than 500 new jobs will be created there. 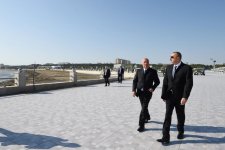