The victory in Azerbaijan’s Karabakh region [liberated from the Armenian occupation] is the most significant victory of the Turkic world after the war for Turkey's independence, Professor of the Department of Biochemistry and Biophysics at the University of North Carolina, the US, the Nobel Prize Laureate in Chemistry, member of the US National Academy of Sciences, famous scientist Aziz Sancar said at a press conference on Dec. 6, Trend reports on Dec. 6.

Sancar stressed that he followed the war for 44 days.

“Shusha is considered the center of the culture of the Turkic world in terms of history,” the scientist added.

“I promised that after the liberation of Shusha city I would go there and pray in the mosque,” Sancar said. “Fortunately, my dream has come true.” 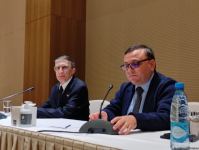