In the framework of partnership between Carlsberg Azerbaijan and AzərŞəkər companies aimed to revive the cultivation of malting barley in Azerbaijan, a memorandum on further cooperation was signed on November 26, 2020.

It should be reminded that in order to localize raw materials for brewing production in 2019, Carlsberg Azerbaijan and AzərŞəkər initiated a pilot project on cultivation of malting barley in Azerbaijan. The main goal of the pilot seeding was to determine the potential performance of the tested varieties in local conditions, to determine whether the quality indicators are consistent in terms of suitability for brewing purposes. Samples of the first crop of local barley were tested in local and regional laboratories of the Carlsberg Group, which allowed initiators to plan further scaling up of the project.

So, in mid-November 2020, sewing of barley was carried out on the territory of Shamkir region with an area of 70 hectares, which will provide more than 10% of the annual demand of Carlsberg Azerbaijan in malting barley in 2021 and significantly increase the supply of local barley by 2022.

During the round table, the parties discussed further prospects for the development of the project, as well as replacement of a number of other types of raw materials required for beer production.

Anar Mehdiev, Managing Director of AzərŞəkər: “The goal of the AzərŞəkər company, which has been launched more than 3 years ago, is to create modern agriculture in different regions of the country and invest in the development of innovative farming. I think in just three years we have made significant progress in this direction. One of the main goals that we set for ourselves is to realize the production of products that are to be consumed in our country from local raw materials. One of the first plants grown by our company is sugar beet. The productivity this year was 80 t / ha, which is a very significant result.

The test seeding carried out last year together with Carlsberg Azerbaijan has been successfully completed. In this regard, today we are signing a memorandum of cooperation, thereby bringing our cooperation to a new level. We are confident that our cooperation will make a great contribution not only to the development of our companies, but also to the development of the country's economy and reduce the import of raw materials".

Viacheslav Maltsev, Managing Director of Carlsberg Azerbaijan: “The memorandum of cooperation that we signed is extremely important not only for Carlsberg Azerbaijan and AzərŞəkər, but also for the economy of Azerbaijan. Decades later, this cooperation will allow to revive the cultivation of malting barley in the fertile Azerbaijani lands and make the beer we produce 100% Azerbaijani. After all, it will be produced at our plant in Khirdalan from barley grown in Shamkir, under the strict control of an Azerbaijani brewer, undoubtedly, while maintaining the consistently high qualities of the Carlsberg Group. I am sure that we are at the very beginning of our journey, and malting barley grown in Azerbaijan will not only fully meet the demand for raw materials of local producers, but also turn this crop into an export one”.
***

AzərŞəkər company was founded in 2017 and is engaged in the production of various types of agricultural products, investing in arable land in various regions of the country.

In the current sowing season in the Shamkir farm, on 700 hectares of land equipped with a modern irrigation system, cereals, sugar beets, soybeans and corn are grown.

Until the end of 2021, about 55 million AZN will be invested in Shamkir, Yevlakh, Agjabedi and Fizuli districts in order to provide a total of about 8,000 hectares with modern irrigation systems and the necessary agricultural infrastructure.

Currently, more than 23 million AZN has been invested in agricultural work, the number of employees is 105.Since 2019, a modern agricultural laboratory AgroLab has been operating at the Yevlakh farm.

The Carlsberg Azerbaijan brewery is located in the city of Khirdalan, 10 kilometers from the capital of Azerbaijan. The production capacity of the plant is 8 million decaliters per year. 260 people work in the company and about 400 people work indirectly (distributors, agencies, contractors). The company's total investment in the development of the plant is about 55 million AZN. The annual amount of tax payments to the company's budget is about 20-25 million AZN. The company's portfolio includes such popular brands as Xırdalan, Tuborg, Baltika, Kuler, Əfsanə, Carlsberg, Kronenbourg 1664 Blanc, Seth & Riley's Garage, etc. 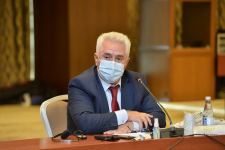