ICT Materials 8 December 2017 12:21 (UTC +04:00)
A group of Iranian startup companies have attended the ongoing Bakutel-2017, the 23rd Azerbaijan International Exhibition and Conference on Telecommunications and Information Technologies, to exhibit their technical capabilities and explore avenues to new marketplaces in the region. 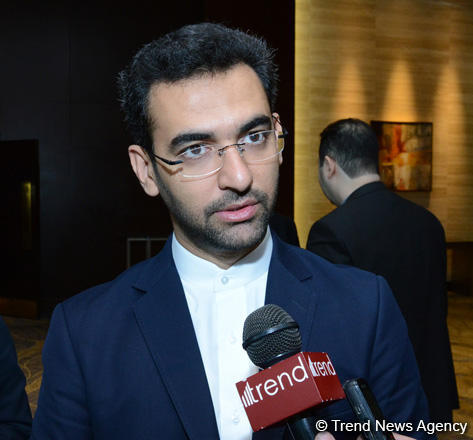 A group of Iranian startup companies have attended the ongoing Bakutel-2017, the 23rd Azerbaijan International Exhibition and Conference on Telecommunications and Information Technologies, to exhibit their technical capabilities and explore avenues to new marketplaces in the region.

"I believe the private sectors of Iran and Azerbaijan have a real chance to reach agreements in the field of startups," Iranian ICT minister Mohammad Javad Azari-Jahromi earlier told Trend on the sidelines of the exhibition.

In the meantime, a spokesperson at Iranian embassy to Azerbaijan told Trend that the Islamic Republic is ready to throw its support behind those entrepreneurs who contribute to bilateral trade with Azerbaijan in particular in the spheres of startups and media.

Speaking about the existing ground for cooperation between Iran and Azerbaijan in the field of transportation, Mohammad Hosseini, the CEO of Asanbar, said that his company has launched an online application aimed at facilitating communication between shippers and drivers.

"According to our research, 71 percent of truck drivers have to drive back home empty! And more than 60 percent of cargo firms always have problems in finding appropriate drivers! Apart from these problems, there are lots of middlemen between these parties, and at the end of the day the drivers’ wage are 50 percent lower than what it supposed to be! Now if you add on the costs of fuel, environmental issues and wasting the time of these people, you can imagine how terrible the situation is in this traditional system!" Mohammad Hosseini said.

The CEO added that his modern platform provides the opportunity for shippers to register shipping requests for bidding or for fixed price.

Then drivers with relevant types of trucks will receive notifications and based on the job details will submit their quotation. Then shippers will choose the appropriate offer and would be able to track their load from origin to destination.

Maryam Vahedi, an official with Neday-e Danesh Hamrah Iranian, described Azerbaijan as an "untapped market" for educational platforms, expressing interest in cooperation with universities in the neighboring country.

Ehsan Khorram, the CEO of Sima Rayan Sharif Company, expressed interest in cooperation with Azerbaijani TV stations, saying his company is ready to provide the TV stations with an online platform for live streaming.

The company had earlier inaugurated Telewebion platform which features both VOD (video on demand) and live broadcast of the Iranian mainstream TV stations.

Speaking about the advantages of Iran’s healthcare sector, Mohsen Norouzi the CEO of the Rouban Sabz Fakher Iranian Company said that his firm has launched the Matab Visit online scheduling software which helps patients book and manage appointments with doctors via web, Android and iOS.

Mohsen Norouzi touched upon high number of foreign citizens arriving in Iran from the neighboring countries for medical purposes, saying his company is capable of offering online services to foreigners in collaboration with local partners.

Abbas Baghban said Lookobook is a social media app for readers and writers where one can discover new user-written stories, as well as e-book of various nature.

"Lookobook provides the writers with an opportunity to write, promote and help their work reach across a wide and varied audience. In the meantime, the application helps writers to publish the hard copies of their works," he said.

Although Google Play is still a main competitor due to its wider range of available apps, it appears that Cafe Bazaar, an Iranian Android marketplace, is endeavoring to maintain sustainable competitive advantages by providing localized services to its users in the region.

Cafe Bazaar, known by many as the largest local app store in Iran, grabbed attention about six years ago when Google Play stopped providing its services to Iranians due to sanctions.

Amir Haghighat from Cafe Bazaar's PR earlier told Trend that the company’s latest data suggested that there were over 34 million active installs of the Cafe Bazaar app, 98 percent of which are in Iran.

According to the Azerbaijani State Customs Committee, the trade turnover between Azerbaijan and Iran amounted to $200.9 million in January-October 2017, which is 28.4 percent more than in the same period of 2016.

Considering the existing capacities in both, Iran and Azerbaijan, it appears that extending support to startup companies would make them capable of playing a key role in booming bilateral trade between the two neighboring countries in the contemporary world.