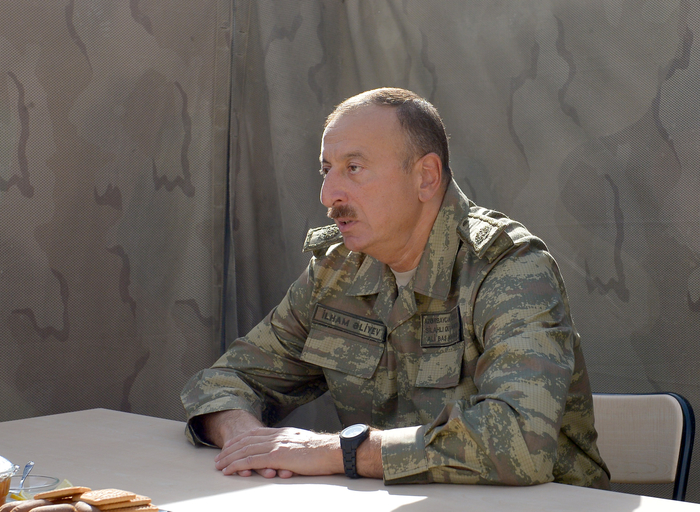 The Azerbaijani army is today able to destroy any facility in Nagorno-Karabakh, Azerbaijani President Ilham Aliyev said during the meeting with the servicemen of one of the frontline military units in the country's Aghdam region on Aug. 6.

"We are aware of this, the Azerbaijani people know this and the enemy should also know this. The stability is still ensured in the region only by virtue of the policy pursued by the Azerbaijani government," Aliyev said.

"Azerbaijan is a stable country. Today, by increasing our opportunities, we have even stronger army that is able to fulfill any task at any time," the president added.

President Aliyev pointed out that Azerbaijan have produced modern weapons and equipment in recent times.

"At the same time, the machinery, equipment, weapons and ammunition that we obtain from foreign sources meet the latest standards. We have purchased the most modern air defense installations. Our army has the most powerful artillery".

"Missile systems with high accuracy and very great destructive power, combat and transport helicopters, combat aircraft, armored vehicles, tanks - all are the factors that today constitute the potential of the Azerbaijani army," the head of state added.

Aliyev underscored that the professionalism and the fighting efficiency of the Azerbaijani army is improving, Azerbaijani soldiers, ensigns and officers serve the motherland with dignity and are devoted to their homeland.

"There is enthusiasm in all our military units, especially in those located on the frontline. The Azerbaijani soldiers have very high and strong sense of patriotism. We will continue to increase our potential. Currently, the maintenance supply of the Azerbaijani army is at the highest level. The weapons and equipment that we obtained in recent times give ground to say that we are able to fulfill any task," the head of state noted.

Azerbaijani president also touched upon the latest incidents on the contact line of Azerbaijani and Armenian troops.

"A week ago, the enemy - Armenian occupation forces - cowardly, meanly attacked our positions under the cover of night. We suffered losses, our soldiers became martyrs. May God rest the souls of all the martyrs, bestow patience to their families and friends. But at the same time, the enemy got an adequate response. The Armenian side as always hides its losses. However, we know that dozens of occupants were destroyed."

"The soldiers, ensigns and officers that showed outstanding courage, bravery and professionalism during these operations, are now sitting at this table. I awarded them. On behalf of the Azerbaijani people, I'd like to express gratitude to you for your bravery and professionalism. I'm confident that you will continue to perform all combat missions with dignity," Aliyev stressed.

Azerbaijani president went on to add that today the enemy is in panic and in hysterics.

"We are aware of this. We have enough opportunity to find out what is going on in the opposite side. We have completely taken the possession of military and moral excellence. We are in our land. Our martyrs who died a week ago died in their own lands. A question arises: what was an Armenia soldier - a soldier of the occupation forces - doing in the territory of Aghdam?"

"Today, the fascist leadership, the military junta of Armenia is leading its country into the abyss. They occupied our lands, but at the same time they have occupied the entire Armenia. Armenian people should get rid of the criminal and corrupt leadership," the president added.

The Azerbaijani president stressed that otherwise, Armenia will face great disasters, adding that if Armenia's fascist government doesn't abandon its dirty deeds, the very existence of the Armenian state can be open to question.

"Today we are well aware that the Armenian state was created on the historical Azerbaijani lands. Irevan khanate, Zengezur, Goycha mahal are our historical lands," Aliyev stressed.

"We, Azerbaijanis must and will return to these lands. We need to restore our territorial integrity. Nagorno-Karabakh is the native Azerbaijani land. It always has been, so it is today, so it will be tomorrow," President Aliyev said.