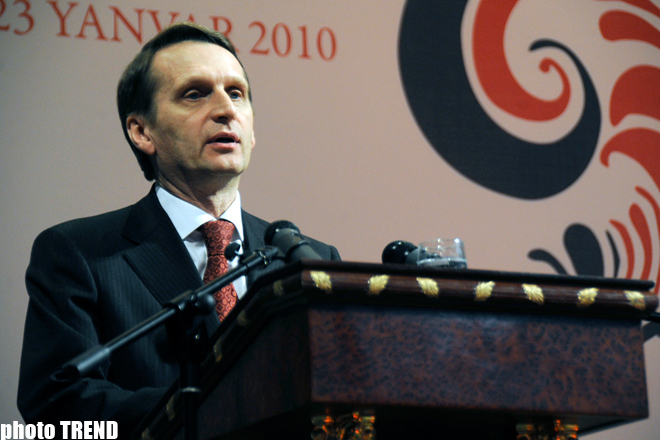 This meeting is significant. It shows how much we need each other. Azerbaijani people are fraternal. We must continue our close ties, Russian Presidential Administration Head Sergei Naryshkin said today at the closing ceremony of the First Forum of Azerbaijani-Russian public held in Baku.

"We have learned more about Azerbaijan. I want to thank Azerbaijani President Ilham Aliyev for the preservation of the Russian language in Azerbaijan", Naryshkin said.

According to him, it is important for the parties to protect the truth about the victory in the war 1941-45 for young people. It is in our hands.

"I hope that strong interstate friendship will be the results of our meetings", Naryshkin said.

On Friday in Baku opened the first Russo-Azerbaijani Forum on humanitarian cooperation. Its organizers are the state structures of the two countries. The forum discussed topical issues of bilateral relations, the interaction of political institutions, civil society, professional associations and creative unions of countries. Particular attention is paid to the role of media in building bridges between Russia and Azerbaijan, bringing the reality of two states to the general public, preserving the Russian language and expanding the Russian-speaking information space.

95 candidates withdraw their candidacies in Azerbaijan within parliamentary election
Politics 17:23