Politics Materials 29 May 2013 22:07 (UTC +04:00)
No one doubts of the support for Azerbaijani President Ilham Aliyev’s candidacy and his victory at the 2013 elections, Head of the Azerbaijani Presidential Administration's Social and Political Department Ali Hasanov said. 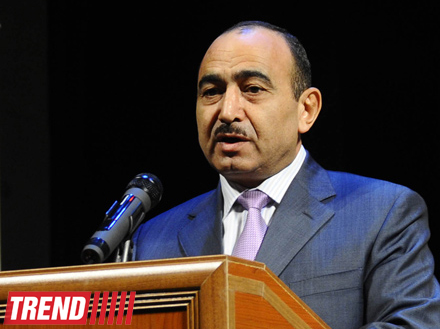 Hasanov made the remarks at the meeting "Strengthening NGO - government dialogue" held within the "Organizing the public hearings for the NGO sector development" project today.

"Even according to the polls conducted by an organization operating under the EU, the European Commission, around 92 percent of Azerbaijani citizens, eligible to vote, are in general satisfied with the Azerbaijani government's activity," Hasanov said.

"The authorities highly appreciate the NGOs' support for President Aliyev's candidacy as this support rendered by the civil society organizations, youth, trade unions and veterans is an estimation of his activity by citizens," Hasanov said.

"There is nothing more than this for the President," Hasanov stressed.

"It is difficult to manage the trade unions," he added. "They have always been established in the state organizations to protect the rights of working people. Therefore, as a rule, they oppose to the country."

"However, young people even in their families represent a category, opposing to the parents' positions," he said. "NGOs deal with the work, in which the government is not involved. Therefore, NGOs are the organizations demonstrating an alternative activity. Therefore, a statement, supporting President Ilham Aliyev's candidacy at the presidential elections 2013 on behalf of over 600 organizations represented in the National NGO Forum, is significant for us."

It should be recalled that the Azerbaijani NGOs supported Ilham Aliyev at the upcoming presidential elections on Wednesday. A statement was made at a meeting "Strengthening NGO - government dialogue" held within the "Organizing the public hearings for the NGO sector development" project.