President of the Republic of Azerbaijan Ilham Aliyev has reviewed the Culture Center in Lankaran after major overhaul.

Established in 1982, the center has played an important role in the public, political and cultural life of Lankaran. The center was overhauled to moderns standards. Reconstruction work here started in April of 2014 and ended this April.

The head of state was informed of the conditions created in the Culture House. A photo stand reflecting visits of national leader Heydar Aliyev and President Ilham Aliyev to Lankaran and their attention to the development of culture in the country was installed in the center. The three-storey building has a 550-seat auditorium.

There are director`s and make-up rooms, decoration and sewing workshops in the complex. The Culture House offers a rich book collection. It has a reading room and a 50-seat conference hall. The Culture House will offer dance, English language, computer and other courses.

An ethnographic exhibition was arranged here, highlighting the ancient history of Lankaran. 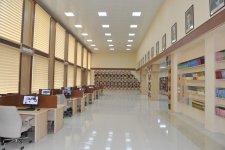