Azerbaijani grandmaster Shahriyar Mammadyarov played for a draw with Jones Gawain from England in the 12th round of "Tata Steel Chess" tournament.

The tournament is held in Wijk aan Zee, Netherlands.

Mammadyarov with eight points is on the third line of the tournament and behind the leaders Magnus and Giri for half a point.

Tomorrow, in the final stage of the tournament, the representative of Azerbaijan will play with the Indian Anand Viswanathan. 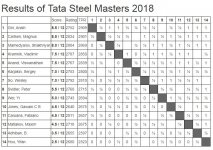