Society Materials 26 February 2018 16:27 (UTC +04:00)
A series of events was organized in Egypt by the Embassy of Azerbaijan and the Patriot union of diaspora organizations in connection with the 26th anniversary of the Khojaly genocide, the Embassy told Trend. A series of events was organized in Egypt by the Embassy of Azerbaijan and the Patriot union of diaspora organizations in connection with the 26th anniversary of the Khojaly genocide, the Embassy told Trend.

A commemorative event dedicated to the Khojaly genocide was held at the embassy in Cairo.

The event was attended by employees of the Embassy, Azerbaijanis living, studying and working in Cairo.

Addressing the event, Ambassador Tural Rzayev spoke about the genocide committed 26 years ago by Armenian militants and their patrons against the civilian population in Khojaly.

The first political assessment to the Khojaly genocide was given by national leader of the Azerbaijani people, Heydar Aliyev, he said.

Speaking about the existing dual standards in the world, the envoy stressed with regret that the criminals who committed the Khojaly genocide still remain unpunished.

Seymur Nasirov, head of the Azerbaijani diaspora in Egypt, advised the young people participating in the event to use the social networks more actively and to post materials about the important issues of the Azerbaijani people, including the Khojaly genocide.

He called for taking an active part in the “Justice for Khojaly” campaign initiated by Vice-President of the Heydar Aliyev Foundation Leyla Aliyeva. 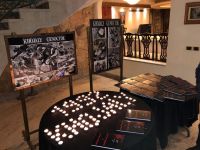