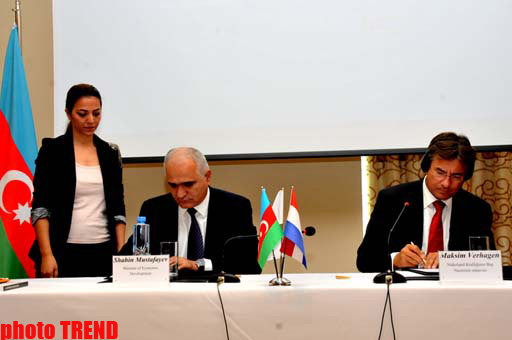 Azerbaijan attaches great importance to the relations with the Netherlands and Azerbaijan-Dutch Business Forum held in Baku will make another contribution to the development of cooperation between the two countries, Economic Development Minister Shahin Mustafayev said at the signing ceremony of the Declaration on the draft agreement on mutual protection of investments.

"Entrepreneurs from the Netherlands have shown great interest in the various areas of the economy of Azerbaijan, and we are ready to consider them.

A good framework is established through the efforts of the two countries, and we are ready to develop it further," Mustafayev said.

At present, the two countries signed 10 agreements in the economic sphere.

He added that currently 70 Dutch companies have been operating in Azerbaijan. The total volume of Dutch investments in Azerbaijan's economy amounts to $365 million.

The trade turnover between Azerbaijan and the Netherlands increased by 42 percent during seven months of the year.

Three more documents were signed during the event. The Memorandum of Understanding Masters Courses in business management and development of the experimental farms signed between the Azerbaijan State Agrarian University and consulting company for the production of dairy products Friesian is among them. A Memorandum of Understanding in the field of business management between the Azerbaijan Diplomatic Academy and the control center of Maastricht, the agreement on technical design office building with area of 10 thousand square meters in the frame of Baku-White City project were also signed. Loan portfolio of trade and services sector increases in Azerbaijan