The ministers stressed the constant development of military cooperation between the two countries and the development of the strategic partnership based on the fraternal and friendly relations during the meeting with participation of the delegations.

The sides highlighted the signing of the final protocol on the results of the eighth meeting of the Azerbaijan-Turkey High-Level Military Dialogue.

They discussed a number of issues on the prospects of developing the relations between the armed forces of both countries, the development of the cooperation in the military, military-technical spheres and the sphere of military education. 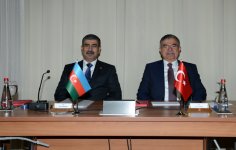