Kyrgyzstan: UN agencies gearing up operations ahead of winter

Kyrgyzstan Materials 25 August 2010 00:17 (UTC +04:00)
United Nations agencies are gearing up efforts to ensure that hundreds of thousands of people affected by the recent violence in Kyrgyzstan have enough food and adequate shelter ahead of the upcoming winter season, UN website reported. 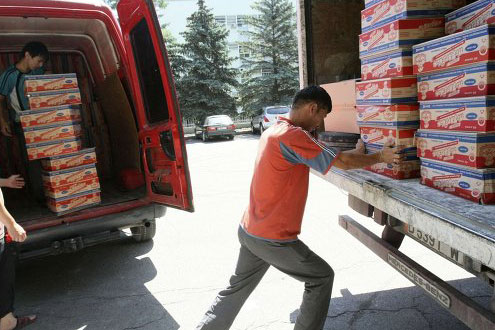 United Nations agencies are gearing up efforts to ensure that hundreds of thousands of people affected by the recent violence in Kyrgyzstan have enough food and adequate shelter ahead of the upcoming winter season, UN website reported.

A nationwide assessment carried out by the World Food Programme (WFP) in July found that more than one quarter of Kyrgyz households - or some 1.4 million people - were food insecure.

The report warned that a further 340,000 people are at risk of becoming food insecure over the coming months, due to the deteriorating economic situation and winter hardship, when food stocks are exhausted and additional expenses are required for heating and winter clothing.

"Donor response has so far been very positive - for which we are extremely grateful," said Carl Paulsson, Officer in Charge of WFP's operations in Kyrgyzstan. "But we are going to have to ask the donors to dig even deeper into their pockets to prevent people going hungry through the winter."

Nearly 400,000 people were uprooted by the clashes that erupted in June in the southern cities of Osh and Jalalabad between Kyrgyz and ethnic Uzbeks.

The WFP survey noted that food insecurity was high in Osh and Jalalabad provinces and the situation remains extremely volatile.

Even before the violence, the agency was providing food assistance to up to 333,000 vulnerable people to help them through the lean winter months and had started a number of food-for-work projects in rural areas.

WFP is also planning blanket distributions to some 287,000 of the most severely affected and food insecure, as well as direct cash transfers to some 37,000 internally displaced persons (IDPs), both of which will begin next month.

Meanwhile, the UN High Commissioner for Refugees (UNHCR) and its partners are constructing transitional shelters for displaced families whose homes were destroyed during the violence.

"With the coming winter only months away we estimate that some 75,000 people remain displaced and need shelter," UNHCR spokesperson Andrej Mahecic told reporters in Geneva.

Some of these people are being accommodated in UNHCR tents which were provided as part of the agency's emergency response to the displacement crisis, while others are staying with families, friends or neighbours.

UNHCR has been working with the authorities on prompt registration and restoration of lost or destroyed personal identity documents, without which people face difficulties in getting access to services and exercising their social, economic and political rights.

The agency has developed a transitional shelter strategy to help people whose homes have been completely destroyed, until permanent housing can be provided through the Government's reconstruction programme.

Some 900 of the most vulnerable families in Osh and another 450 in Jalalabad are being provided with warm transitional shelters on the plots or foundations of their destroyed homes before the onset of winter.

"In addition, we plan to distribute more humanitarian aid and continue to help the displaced living with host families to survive winter," said Mr. Mahecic.