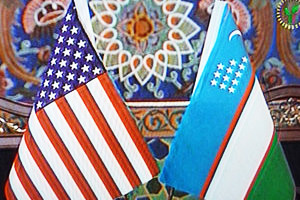 During the meeting, Karimov and Wallander discussed the topical issues of the bilateral cooperation in various spheres, as well as certain regional and international problems.

By signing the security assurance protocol to the Central Asian Nuclear-Weapon-Free Zone Treaty initiated by Uzbekistan in September 1993, the U.S. and other nuclear-weapon states made a real contribution to the implementation of the Treaty on the Non-Proliferation of Nuclear Weapons.

During the meeting, the two sides stressed that the completion of the ratification process of this protocol will be of great importance both in the global disarmament and non-proliferation process, and in formation of the mechanisms for strengthening the regional and international security.

They also exchanged views on the situation in Afghanistan and its impact on the regional process, as well as other issues of mutual interest.

During the meeting with Uzbekistan's Foreign Minister Abdulaziz Kamilov, Wallander also discussed the topical issues of bilateral cooperation. During the talks, the two sides emphasized the positive dynamics of the Uzbek-U.S. dialogue aimed at developing the relations in the spheres of mutual interest.