Demands grow for action against Russia

Demands for diplomatic action against Russia over its actions in Georgia, including its recognition of two breakaway regions, continued Thursday with French Foreign Minister Bernard Kouchner saying European nations were considering imposing sanctions, dpa reported.
Kouchner, speaking three days before an emergency European Union summit in Brussels, told reporters that "sanctions are being considered, as well as other means" to address the issue, but he did not specify.
However, he later denied some press reports suggesting that he was in favour of sanctions against Moscow because of the crisis in the Caucasus.
"I, myself, would not anticipate sanctions (being imposed) while the meeting has not yet taken place," said Kouchner. France is currently president of the Union and has been at the forefront of the EU's attempts to resolve the crisis.
Russia's Foreign Minister Sergei Lavrov dismissed such action, saying Kouchner "says a lot of things."
He noted the French minister had also expressed fear that Russia could move its military into Moldova and the Crimean Peninsula in Ukraine, news agency Interfax reported.
"To me, this outpouring demonstrates utter confusion," Lavrov told journalists on the sidelines of a summit of Asian states in the Tajik capital of Dushanbe.
Demands for diplomatic action have grown louder since Moscow formally recognized the independence of Georgia's breakaway regions Abkhazia and South Ossetia on Tuesday. The breakaway provinces fuelled a brief but bloody Russian-Georgia conflict earlier this month.
Kouchner said the aim of next Monday's extraordinary summit, the first such crisis meeting since the 2003 Iraq war, would be to "draw up a strong statement reflecting our determination not to accept" the situation in Georgia.
In other developments Georgia's foreign minister called on the UN Security Council on Thursday to take action against Russia, alleging it had breached international security by its actions in her country.
At a special meeting of the Organization for Security and Co- operation in Europe (OSCE) in Vienna, Foreign Minister Ekaterine Tkeshelashvili said the Security Council should be act under Chapter 7 of the UN charter, which deals with non-military and military sanctions to restore peace and security.
"It is not only a threat to international security, but a breach of it," Tkeshelashvili said, referring to Russia's military involvement in Georgia and its recognition of South Ossetia and Abkhazia.
The minister also alleged that Russian forces had conducted ethnic cleansing in South Ossetia.
"The territory previously known in Soviet times as South Ossetia is completely cleansed of remnants of the Georgian population," she said. In the buffer zone around the breakaway province, ethnic cleansing was ongoing, she added.
The Permanent Council of the OSCE, the organization's decision- making body, was meeting to discuss recent developments in Georgia and the modalities of sending up to 100 additional observers there.
Moscow's recognition of independence of South Ossetia and Abkhazia was "an additional factor that needs to be taken into account" in finding agreement on the modalities of the observer mission, OSCE spokesman Martin Nesirky said.
In other diplomatic developments Poland's President Lech Kaczynski is slated to meet with heads of three Baltic states to work out a common stance on Georgia for the upcoming EU summit, his chancellery told Radio ZET on Thursday.
"There's an expectation from the Baltic states that the president in Brussels will present a common stance of the three states - the three Baltic states and Poland," said Piotr Kownacki, vice-chief of the president's chancellery.
Kaczynski, one of Georgia's strongest supporters in the conflict with Russia, will meet with his counterparts from Lithuania, Latvia and Estonia either on Thursday or Monday. He could fly Thursday to Vilnius or another Baltic capital, Kownacki said, or meet the heads of state in Brussels on Monday before the summit.
Polish Prime Minister Donald Tusk will attend Monday's summit along with Kaczynski. The two politicians are also slated to meet on Friday to work out a common strategy on the Georgia issue.
Meanwhile the NATO military alliance said Thursday that its deployment of four warships in the Black Sea was planned more than a year ago and has nothing to do with the latest developments in nearby Georgia, the alliance said Thursday.
The statement from Brussels follows expressions of concern by Russian officials at what they call a "buildup" of NATO ships in the area.
"This deployment is routine in nature and has been planned for over a year, notification of the requirement to transit the Turkish Straits was given in June, well before the current Georgia crisis and is completely unrelated," NATO said.
A NATO spokeswoman stressed that "there is no NATO naval build-up" and that the fleet's exercises with Bulgarian and Romanian ships would be limited to "the Western part of the Black Sea."
The alliance also sought reassure Russia that its fleet would only be stationed in the Black Sea for a maximum of 21 days. 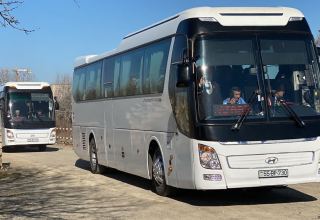 Azerbaijan to increase number of bus routes to Karabakh (Exclusive)