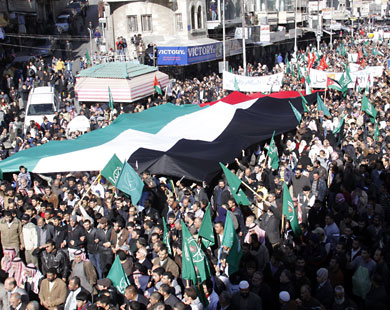 The coalition of opposition parties of Jordan plans to hold a rally at the Professional Associations Complex on Friday to call for reform, The Jordan Times reported.

The decision was adopted by six opposition parties, including the Islamic Action Front (IAF), following disagreements over holding street protests that threatened the unity of the opposition.

Opposition leaders have played down the significance of ongoing disagreements among parties, insisting that each party has the right to react to the current political situation according to their priority.

But leaders of the Islamist movement have hit out at parties which boycotted the street protests.

"In the future, we will see where these parties stand when results of these protests appear," Zaki Bani Rsheid, president of the IAF political bureau, told The Jordan Times.

Last Friday, the IAF, the political arm of the Muslim Brotherhood, and the National Unity party were the only two opposition parties that participated in the downtown Amman protest.

Other opposition parties, including Hashed, the Jordan Bath Party, the Arab Baath Party and the Jordan Communist Party refused to take to the streets, saying they prefer dialogue.

Leaders of most opposition parties, labour unions and independent figures are expected to join hands in their call for quick and genuine reform at the rally.

Meanwhile, the coalition of opposition parties said it would take part in talks with the dialogue committee, led by Senate President Taher Masri.

Opposition leaders said they do not mind taking part in the dialogue, but stressed certain conditions.

"We are not against talks with the government or anybody. This is the best course of action, but it is important to know the framework and duration of the talks, and how serious the authorities are about meeting pledges of reform," IAF Secretary General Hamzah Mansour said.

He said the Islamist movement would not shut the door to dialogue, insisting that street protests and other events do not contradict with talks.

"We have our reservations and we made them clear to the committee president. We do not want to talk for the sake of talks. We want a certain framework, guidelines and guarantees before sitting down at the table," Mansour said.

Friday's rally will represent the end of weeks of street protests by the Islamist movement in downtown Amman and outside the Prime Ministry.