Arab World Materials 7 September 2014 22:35 (UTC +04:00)
President Barack Obama will explain to Americans and congressional leaders this week his plan to go on the offensive against Islamic State militants, who he said could eventually become a threat to the United State. 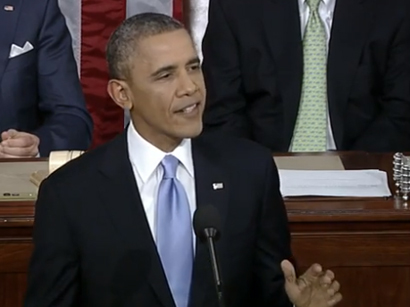 President Barack Obama will explain to Americans and congressional leaders this week his plan to go on the offensive against Islamic State militants, who he said could eventually become a threat to the United States, Reuters reported.

Obama said he will make a speech on Wednesday to "describe what our game plan's going to be," and will meet congressional leaders on Tuesday to seek their support for his strategy to halt the militant Islamist group.

The president, who campaigned for the White House in 2008 on getting U.S. troops out of Iraq, has struggled to articulate how he wants to address Islamic State, telling reporters last month that "we don't have a strategy yet" to tackle the group.

"I just want the American people to understand the nature of the threat and how we're going to deal with it and to have confidence that we'll be able to deal with it," Obama said in an interview with NBC's "Meet the Press" that aired on Sunday. The interview was conducted in Washington on Saturday.

"The next phase is now to start going on some offense," he said.

The Wednesday speech will come a day ahead of the anniversary of the Sept. 11, 2001, attacks, when al Qaeda militants flew hijacked planes into the World Trade Center in New York and the Pentagon, killing about 3,000 people.

The speech underscores the degree to which Islamic State has become an urgent issue for the United States. The group has seized territory in northern Iraq and eastern Syria, declared a border-blurring Islamic caliphate and released grisly videos of the beheading of two U.S. journalists who it had held hostage.

Asked whether he was asking Congress for a vote on his plan, Obama said, "I'm confident that I have the authorization that I need to protect the American people. ... But I do think it's important for Congress to understand what the plan is, to have 'buy in,' to debate it."

Republicans in Congress, which returns from its summer recess on Monday, have blocked proposals from Obama on a wide range of issues during his presidency.

Obama said that while there was no immediate U.S. intelligence about threats to the homeland from Islamic State, the group has attracted foreign fighters from Western nations who could travel to the United States "unimpeded" and eventually pose a threat.

Obama ruled out sending U.S. ground troops to fight in Iraq or Syria, saying "this is not the equivalent of the Iraq war," and described the coalition he spent time building last week at a NATO meeting in Wales.

"We are going to be a part of an international coalition, carrying out air strikes in support of work on the ground by Iraqi troops, Kurdish troops," Obama said. Nine other countries have agreed to be "core" members of the coalition.

The heads of both the Senate and House of Representatives intelligence committees on Sunday urged Obama to use U.S. special operations forces as part of his plans.

Republican Mike Rogers, who heads the House Intelligence Committee, also told the CNN program "State of the Union" that Obama needs to "lay out a very certain case" on confronting Islamic State. Rogers added, "We need to have an end-game."

Republican Peter King, a House intelligence panel member, told the ABC program "This Week" that "it's probably better" for Obama to get congressional approval for this plan "which I would certainly vote for." But King said he believes the president has the constitutional authority to take action in Iraq and in Syria against Islamic State without congressional approval.

On the CBS program "Face the Nation," Florida Senator Marco Rubio, a possible 2016 presidential candidate, said Obama has "committed presidential malpractice in his foreign policy" and urged Obama to carry out air strikes in Syria.

Obama did not say whether he would authorize air strikes in Syria. "The strategy both for Iraq and for Syria is that we will hunt down ISIL members and assets wherever they are," he said, using an acronym for Islamic State.

He emphasized the United States would need Sunni Arab states in the region including Saudi Arabia, Jordan and the United Arab Emirates, as well as Turkey to "step up" and help.

Obama has faced criticism for appearing disengaged on the Iraq crisis, particularly after he played a round of golf minutes after speaking about the beheading of American journalist James Foley by Islamic State militants.

Obama told NBC he wished he could get "a vacation from the press" but admitted the golf game was a bad decision, adding, "I should've anticipated the optics."