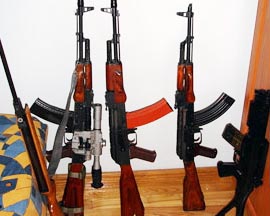 ( AFP ) - Prime Minister Nuri al-Maliki offered Shi'a militants a cash for weapons deal on Friday in an attempt to end violent clashes across Iraq that have killed more than 120 people.

Maliki gave the Shi'a gunmen until April 8 to surrender heavy and medium weapons used against Iraqi army forces in fierce fighting that has engulfed Shi'a areas across the country since Tuesday.

The prime minister's move is part of a three-pronged effort to break Shi'a resistance, along with the imposition of a three-day curfew in Baghdad and coalition precision bombing.

On Friday, most of the capital's main roads were deserted as residents observed the curfew, set to stay in place until dawn on Sunday.

"All those who have heavy and medium arms, they should surrender them to the security forces and receive money starting from March 28 until April 8," Maliki said in a statement issued by his office in Baghdad.

The offer extended an earlier deadline of midnight on Saturday for fighters to lay down their weapons.

"We confirm the objectives of the operation in Basra which is to chase illegal elements and to put all the weapons under the control of law," Maliki said.

Dozens of people have been killed in the city and more than 120 overall in Shi'a areas across Iraq.

"These weapons create problems for civilians and their property. The government wants to give a chance to solve the problem without having to call upon the wrath of legal action."

Fighting has raged in other Shi'a strongholds such as the central city of Kut, Nasiriyah in the south, Hilla and Baghdad's Sadr City, security officials said.

Sadr City, the bastion of cleric Moqtada al-Sadr's Mahdi Army militia, accounts for a quarter of the known death toll so far.

Despite the crackdown, clashes killed at least four police officers in Nasiriyah on Friday, a local police official said.

"The militants are trying to attack police stations," he said on condition of anonymity. The official said some fighters had also been wounded and arrested.

British spokesperson Holloway said British coalition forces based at Basra airport have also been providing air support over the city, surveillance and are refuelling Iraqi helicopters and transport planes.

"Coalition forces are providing capability in those niche areas that the Iraqi armed forces don't have," Holloway said.

"Particularly we are providing them air power over the top of the city. The Iraqi air force does exist but doesn't yet have fast jets. We are also providing surveillance and that is being fed back into the Iraqi's operational command centre in Basra.

"And also they have been providing air support in terms of dropping munitions on identified militia targets in the city."

Maliki, whose armed forces are facing the first major test of their authority, has vowed to pursue the crackdown on Shi'a gunmen despite protests and mounting casualties.

The crackdown focusing on areas controlled by the Mahdi Army has severely strained a "freeze" of the militia's activities that Sadr ordered last August.

The powerful cleric appealed late on Thursday for a "peaceful and political solution to end the crisis," according to a statement released by his office in the holy city of Najaf.

In Baghdad, Sadr's followers staged noisy protests on Thursday against the crackdown in Basra and demanded the resignation of Maliki, who is personally overseeing the military operations.

Basra has become the theatre of a turf war between the Mahdi Army and two rival Shi'a factions - the powerful Supreme Iraqi Islamic Council (SIIC) of Abdel Aziz al-Hakim and the smaller Fadhila party.

Maliki's offensive drew praise from US President George Bush, who called the fighting in Basra a "positive moment" for the development of Iraqi security forces and proof the Baghdad government could defend itself.