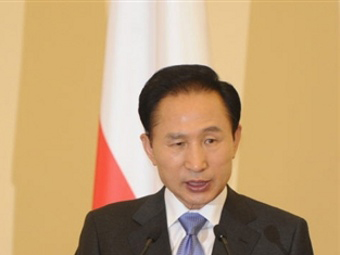 President Lee Myung Bak also mooted a possible "reunification tax" to help pay for the astronomical possible cost of one day joining the high-tech economy of South Korea with the Stalinist peasant economy of the communist-ruled North.

Stressing that any possible reunification was a distant prospect, Lee suggested a three-stage confidence building process.

First would be a "peace community", which saw the entire Korean peninsula denuclearised.

That would be followed by an "economic community" promoting cross- border financial ties and integration, which would eventually lead to a "community of the Korean nation".

Tensions between the nuclear-armed reclusive regime in Pyongyang and the democratic South are at an all-time high, following the sinking earlier this year of a South Korean warship.

That was blamed by South Korea, and an international panel of investigation, on North Korea - a charge it denies.

"The North must never venture to carry out another provocation, nor will we tolerate it if they do so again," Lee said.

Worries about possible instability during any regime change following the death of 69-year old leader Kim Jong-Il to one of his sons also underpin the situation.