On September 30, 2020, a solemn ceremony of signing a number of significant documents was held in the Presidential Palace “Salam Khan” in the city of Kabul to facilitate the further implementation of joint infrastructure projects between Turkmenistan and Afghanistan, in particular, the construction of the Turkmenistan-Afghanistan-Pakistan-India (TAPI) gas pipeline, electric and fiber-optic communication line Turkmenistan-Afghanistan-Pakistan (TAP), construction of railways.

The ceremony was opened by Ajmal Ahmadi, Acting Governor of the Central Bank of the Islamic Republic of Afghanistan.

In honor of the signing of these documents, Deputy Chairman of the Cabinet of Ministers, Minister of Foreign Affairs of Turkmenistan Rashid Meredov made a speech, who took part in the ceremony via video conferencing.

Having conveyed the words of greetings from President of Turkmenistan Gurbanguly Berdimuhamedov to the head of Afghanistan, R.Meredov noted the high level of cooperation between Turkmenistan and Afghanistan in a wide range, and also stressed the importance of signing the current documents designed to facilitate the practical implementation of joint projects of geopolitical and geo-economic importance for the entire Eurasian continent.

The signing ceremony was marked by a solemn speech of the President of the Islamic Republic of Afghanistan Mohammad Ashraf Ghani, who expressed gratitude to the President of Turkmenistan Gurbanguly Berdimuhamedov for his support to Afghanistan, commitment to friendship between the two countries and peoples, as well as the development of large-scale energy projects and the creation of multilateral transport and transit corridors designed to exert a constructive influence not only for the comprehensive reconstruction of Afghanistan, but also for regional economic integration.

It was especially noted that the signing of these documents has become yet another step on the way towards further implementation of joint projects on the territory of Afghanistan.

The documents were signed by authorized representatives of Turkmenistan and Afghanistan. These are the Memorandum of Understanding between the State Concern “Turkmengaz”, “TAPI Pipeline Limited” and “Afgan Gaz Enterprise” Concerning the Development of the Herat Off take Strategy Relating to the Turkmenistan-Afghanistan-Pakistan-India Gas Pipeline Project; Memorandum of Understanding on Cooperation between the Agency “Turkmenaragatnashyk” and the Ministry of Communication and Information Technologies of the Islamic Republic of Afghanistan in the field of Communications and Informatization; the Contract between the Operators of the “Turkmentelecom” Electric Communication Company of the “Turkmenaragatnashyk” Agency and the “Afghan Wireless Communication” Company of the Islamic Republic of Afghanistan (“AWCC”) about the Cooperation in the field of Communications; as well as the Turkmenistan-Afghanistan-Pakistan Electricity Transmission Network Project, Heads of Terms – Afghanistan Power Purchase Agreement. 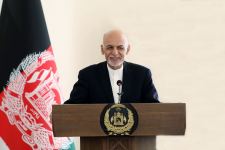