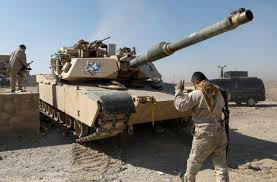 The Iraqi forces have killed more than 200 Daesh terrorists, and liberated around 500 square kilometers (over 190 square miles) of territory west from the northern town of Hawija, the Iraqi Joint Operations Command said in a statement on Saturday, Sputnik reported.

On Tuesday, Iraqi Prime Minister Haider Abadi announced the start of the operation to clear the territories of western Anbar province and Anah city from the remaining Daesh terrorist groups.

“The units of the federal police and mechanized brigade have completed the first and second stages of the operation, regained control of over 480 square kilometers of the territory, liberated 41 villages and destroyed 225 Daesh militants,” the statement read.

The command noted that the armed forces also destroyed the vehicles and weapons, which belonged to the terrorists and managed to move 90 families away from the area of clashes.

Meanwhile, the Middle Euphrates River Valley is one of the two areas where Daesh fighters remain in Iraq. The other zone is the western Anbar province.

The Daesh terror group took control of Hawijah in 2014. This area became a main stronghold of terrorists after the Iraqi army regained control of Mosul in July.

Earlier, the Iraqi authorities announced that they had freed over 90 percent of their territory from terrorists. According to the government data, over 2.2 million refugees have returned to the Iraqi regions which have been liberated from the terrorists.