The Head of State arrived at the Oguz-Gabala-Baku Water Pipeline Office. Here, the President was warmly welcomed by the event participants.
President Ilham Aliyev was informed that the construction of the Oguz-Gabala-Baku water pipeline started to improve water supply to Baku city.
The groundbreaking ceremony for the pipeline was held on March 1, 2007 in Oguz region with the participation of President Ilham Aliyev. The length of the pipeline is 262 km.

President Ilham Aliyev launched the device to supply drinking water to Baku.
The Head of State congratulated builders and wished them successes. 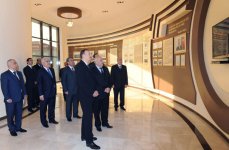