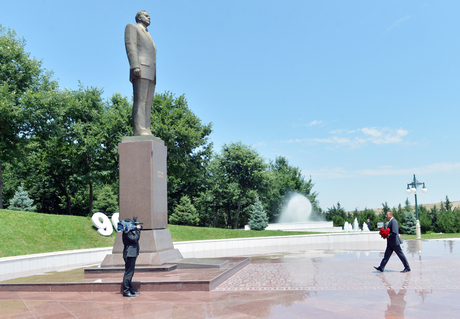 President of Azerbaijan Ilham Aliyev has today arrived in Tovuz district as part of his visit to the country`s western region.

The Head of State put flowers at a monument to national leader Heydar Aliyev in a park in the city center. The President was informed about reconstruction work carried out in the park.

President Ilham Aliyev then opened Tovuz-Qovlar-Aghbashlar highway. The road links 35 residential areas with the total population of 40,000 people. The facility is 51km in length.

The Head of State then inspected the newly-remodelled Qovlar City Culture and Leisure Park. The facility occupies a total area of five hectares. Redevelopment of the park included installation of a fountain and decorative trees and bushes.

President Ilham Aliyev then officially inaugurated Tovuz Hemodialysis Center. The three-storey center occupies a total area of 6,000 square meters. The Head of State toured the center, and then met its staff as well as local residents.

President Ilham Aliyev then attended a ceremony to launch the redeveloped water supply and sanitation system of Tovuz. The system will supply water and sanitation to more than 30,000 people and 7,000 farms.