Azerbaijani gymnast in tumbling Mikhail Malkin has reached the finals of the FIG World Cup in Trampoline Gymnastics and Tumbling in Baku.

Malkin took the fourth place in qualifications for the finals by scoring 66.800 points.

At these events, Azerbaijan is represented by Ilya Grishunin, Oleg Piunov, Ruslan Aghamirov, Sviatlana Makshtarova and Veronika Zemlianaia in the trampoline individual and synchro pairs programs, as well as by Mikhail Malkin on the tumbling track.

Eighty-five trampoline and tumbling gymnasts from 15 countries are testing their strength on the basis of the new Code of Points coming into force in 2017. 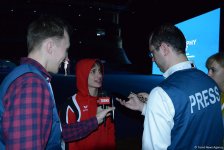