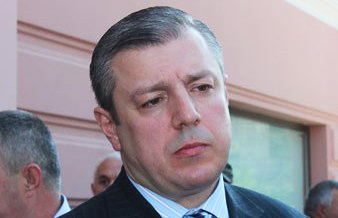 Minister of Economy and Sustainable Development of Georgia Giorgi Kvirikashvili will pay a working visit to Turkey on Thursday.

According to the press service of the ministry, Kvirikashvili will take part in the fifth meeting of the Tripartite Council for the Baku-Tbilisi-Kars Railway Project, which will be held in Istanbul on March 1.

The Baku-Tbilisi-Kars railway is being built on the basis of the Georgian-Azerbaijani-Turkish inter-state agreement. Azerbaijan provided a loan worth $775 million for construction of the Georgian section.

Funding for this project from the State Oil Fund of Azerbaijan is carried out according to a presidential decree on the 'Implementation of measures within Baku-Tbilisi-Kars project' dated February 21, 2007.

$431.3 million has been allocated since the beginning of the funding of the project and up until January 1, 2013.

Plans exist to construct a new 105 kilometre branch railroad within the Baku-Tbilisi-Kars project. In addition, the Akhalkalaki-Tbilisi-Marabda railway will be reconstructed in Georgia which will increase its capacity to 15 million tons of cargo per year. It is planned to build a centre in Akhalkalaki for the transition of trains from the existing train tracks in Georgia to the European system.

In future, with completion of the Marmaray project (construction of a tunnel under the Bosporus), access to Europe will be provided through the Baku-Tbilisi-Kars railway.