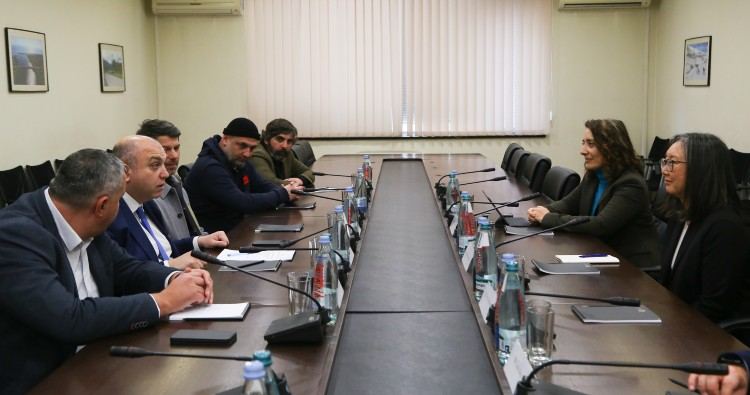 Irakli Karseladze, the Minister of Regional Development and Infrastructure and the Georgian Football Federation President Levan Kobiashvili on Saturday discussed the preparation process for holding the 2023 UEFA European Under-21 Championship in Georgia with the delegation of the Union of European Football Associations, Trend reports with reference to Agenda.

Karseladze briefed the delegation, consisting of Sharon Burkhalter-Lau, the Operations Director at UEFA Events, Peter Nordenström, the Head of Tournaments and Events Planning, the Project Manager Bettina Gressel, and the Special Consultant Luis Silva, on the progress of the rehabilitation works of sports infrastructure, carried out by the Municipal Development Fund in Georgia’s capital Tbilisi, in the western city of Kutaisi, the resort town of Tskaltubo, as well as in the Black Sea coastal cities of Batumi and Kobuleti.

It was noted that many state agencies were involved in the preparations for the championship and the process was proceeding “according to the plan”. The parties discussed the schedule of works of all stadiums and noted they would continue “close” cooperation with each other, the Infrastructure Ministry said.

UEFA representatives, together with the members of the organising group of the championship and the leadership of the Football Federation, visited Ramaz Shengelia stadium in Kutaisi and Mikheil Meskhi Stadium in Tbilisi and gave a “high assessment” of the progress of the works, expressing hope for the “successful” completion of all ongoing works.

A total of 12 UEFA-standard infrastructure facilities will be constructed to host the championship in Georgia between June 21-July 8, with ₾100 million (about $37 mln) allocated for the project.