The Telegraph: 10 most attractive sights of Azerbaijan (PHOTO) The Telegraph has published the photos of ten most interesting and attractive tourist attractions in Azerbaijan on its website.

There is also the brief information about the sightseeing.

The author of the photos is famous adventurer Sophie Ibbotson.

In her notes to the photos Ibbotson calls Azerbaijan as a dynamic and rich country. 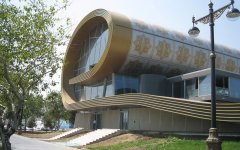