The voter turnout at presidential election is high in Azerbaijan, the observer of OSCE Office for Democratic Institutions and Human Rights (ODIHR), Barbara Miller told Trend on Wednesday.

The observers have observed the opening of the station and voters' participation in election.

Ukrainian MPs from the CIS Parliamentary Assembly, Sergei Grinevski and Svetlana Fabrikant have also observed the process at this station. 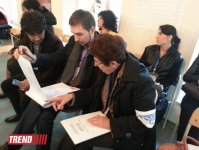