Results of Azerbaijani gymnasts’ performance in exercises with clubs, ribbons as part of Rhythmic Gymnastics World Cup in Baku (PHOTO) Azerbaijani gymnasts Zohra Aghamirova and Arzu Jalilova demonstrated a program with clubs and a ribbon during the second day of the Rhythmic Gymnastics World Cup in Baku, Trend reports on May 8 referring to the Azerbaijan Gymnastics Federation (AGF).

Aghamirova received 23,000 points while Arzu Jalilova - 21,650 points for the exercise with clubs.

Aghamirova's program with a ribbon was rated at 21.275 points by the referees and the athlete claims to reach the final with this result.

Jalilova's result in the program with a ribbon was 17.550 points, she ranked 25th.

On May 8, the second day of the Rhythmic Gymnastics World Cup is being held at the National Gymnastics Arena in Baku. In the individual program, the Graces demonstrate exercises with clubs and bands. There will also be a qualification of teams in group exercises, which will present a program with three hoops and two pairs of clubs. According to the results of the qualification, the finalists will be determined.

Azerbaijan is represented by Zohra Aghamirova and Arzu Jalilova at the competition in the individual program. In group exercises for the country, the team will consist of Lyaman Alimuradova, Zeynab Hummatova, Yelyzaveta Luzan, Maryam Safarova and Darya Sorokina.

Traditionally, a gymnast and the team with the highest number of performance points during the competition will be awarded the AGF Trophy Cup. The competitions are held in accordance with the quarantine measures in force in the country, given the sanitary and epidemiological requirements and without the participation of spectators. 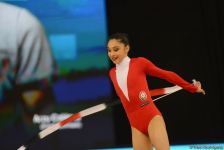