He added that the existing international cooperation in this sphere is an example of mutual trust.

President Aliyev noted that the event is attended by important guests from various countries.

Azerbaijan has established close cooperation with the European Commission for the implementation of SGC project, he said.

“We have been able to create a unique and exemplary format of international cooperation,” noted the president emphasizing that the implementation of SGC project is a very important factor for future ties.

Speaking about the energy policy of Azerbaijan, President Ilham Aliyev noted that the “Contract of the Century” signed in 1994 has played a significant role in the implementation of future energy projects.

He said that the achievements of modern Azerbaijan have become possible thanks to this contract.

Emphasizing the importance of the Shah Deniz gas field in the implementation of SGC project, the president said that the capacities of this field play an important role in the popularization of Azerbaijan as a country with huge gas reserves.

The head of the state noted the importance of regional cooperation under this project and gave examples of energy corridors implemented by Azerbaijan, Georgia and Turkey over the years.

Stating the significance of an agreement signed several years ago between Azerbaijan and Turkey on the implementation of TANAP project, as well as the Trans Adriatic Pipeline project in effectuating the Southern Gas Corridor, President Aliyev noted that such meetings have a special role in the timely and qualitative implementation of the project.

The president spoke about the advancements achieved since the last year’s meeting, noting that Shah Deniz-2 project has been implemented by 90 percent. Furthermore, important achievements have been observed with regard to TANAP and TAP projects.

He added that the development of Azerbaijan’s Absheron gas field has commenced, which shows that the country’s gas potential is not limited to Shah Deniz.

The head of the state noted that the environmental issues, being envisaged as part of the project, are based on high standards, and wished success to the conference. 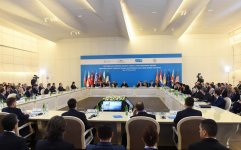