The entrance tunnel is located on the 35-kilometer section of the Kalbajar-Lachin highway, Representative of the State Automobile Roads Agency Eyyub Huseynov told Trend.

According to Huseynov, the 76.3-kilometer long Kalbajar-Lachin highway is among the essential road infrastructure projects implemented under the instruction of President of Azerbaijan Ilham Aliyev in the Karabakh and East Zangazur Economic Regions. The construction of the road and tunnels is currently underway.

The Agency is conducting drilling and excavation work on certain road sections. Moreover, drainage pipes and water canals are being laid, as well as a stone wall is being constructed. The construction activities on five (T1, T2, T5, T6 and T7) of the 12 road tunnels continue.

There are a large number of landslide zones on the existing road passes. In addition, the safe operation of the road may not be possible in heavy snow and frosty weather conditions. In this regard, it has been decided to overcome the passes directly through the tunnels. The tunnels will have one traffic lane in one direction. The total length of the tunnels will account for 7596.5 meters.

The preparation of the subgrade foundation along the Kalbajar-Lachin highway, shaping the slopes, the laying of 12 rectangular and 4 round pipes are currently ongoing.

The highway with two, three, and four lanes, linking Kalbajar and Lachin districts, is being constructed in accordance with the first, second, and third technical standards. In order to ensure the water transfer on the first 38 kilometers of the road, 60 circular pipes with a total length of 3,348 meters, as well as nine highway bridges with a length of 1,038 meters are also supposed to be built in the foreseeable future.

The Kalbajar-Lachin highway takes its starting point from the Kalbajar district's Gamishli village and passes through liberated Lachin district. The new road will provide comfortable entry and exit to many residential areas, to the regional center, as well as to the Lachin International Airport, the construction of which has recently begun. 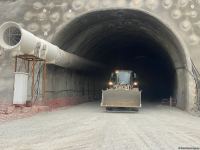