SHUSHA, Azerbaijan, January 24. Another passenger car of the Russian peacekeepers [temporarily deployed near Azerbaijan's Shusha] have driven along the Lachin-Khankendi road without any problems, Trend reports from the scene.

This once again proves that humanitarian vehicles can pass freely through the peaceful protest area, and there are no obstacles for them.

The peaceful protest of Azerbaijanis on the Lachin-Khankendi road against the illicit exploitation of Azerbaijan's mineral resources in the area of Russian peacekeepers' temporary deployment has been going on for over forty days. 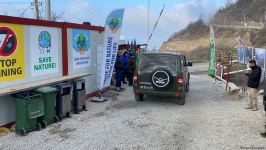