Thousands of Iranians protest against drying up Orumiyeh Lake 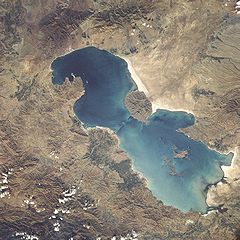 About 50,000 citizens of Orumiyeh city and about 10,000 in Tabriz protested against rapid drying up the Orumiyeh Lake, which has lost half of its surface.

Neither the authorities nor the state media have yet reaction and taken a stance on the issue.

"The lake's disappearance would leave behind 10 billion tons of salt which threatens the lives of 14 million citizens around the lake," Orumiyeh lawmaker Javad Jahangirzadeh said earlier.

Iran 's largest lake, Orumiyeh has dried up almost a third, director of the Iranian State Department for Lakes Protection Ali Nazardust said earlier. Building dams, decrease in rainfall and other negative factors led to drying up of the Orumiyeh Lake.
At present, the salinity of the lake's water is 330 percent, Nazardust said. Earlier, this figure was 160-170 percent. Earlier the reservoir covered 5,000 square meters.