Two communities in Zaqatala and Balakan worked with their local governments to build a new feed-grinding and seed-cleaning facility and egg incubation facility to meet the needs of local farmers. These projects were implemented through the Socio-Economic Development Activity (SEDA), funded by the United States Agency for International Development (USAID) with support from the Ministry of Economy.

In Zaqatala’s Aliabad village, the new feed-grinding and seed cleaning facility allows local farmers to make their own affordable animal feed for their cows and poultry and to clean disease-free seeds for planting crops. They will no longer need to travel long distances to the nearest city to grind their clover, corn, and barley crops into feed and purchase seeds for planting. This facility will benefit nearly 11,000 people whose livelihoods depend on agriculture.

In Balakan’s Garakli village, the egg incubation facility will help increase the population of poultry in three communities where raising poultry is the main income generating activity. A thousand families will now be able to raise chickens without having to travel long distances to purchase chicks from other incubation facilities. The facility will save families time and money, and increase their incomes.

These projects are part of a collaboration between USAID, the Azerbaijani government, and local communities to support citizen-led efforts to improve rural livelihoods. USAID’s SEDA is implemented by the East-West Management Institute with support from the Ministry of Economy. Since 2011, SEDA communities have implemented 149 projects that include activities supporting local economies, medical facilities, roads in rural areas, water and irrigation systems, and local school renovations -- benefiting nearly 255,000 people in 119 communities. 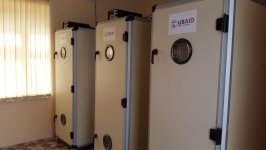