BAKU, Azerbaijan, November 24. The Central Bank of Azerbaijan (CBA) plans to prepare a new strategy from January 2023 together with international organizations, the CBA Governor Taleh Kazimov said at the opening ceremony of the VI International Banking Forum in Baku on November 24, Trend reports.

According to Kazimov, this strategy will be aimed at transforming the CBA and the entire banking sector.

Speaking about financial stability, the official pointed out that both in Azerbaijan and in foreign countries work is underway to strengthen payment systems.

"We are carrying out large-scale work in the banking sector. Over 80 percent of the country's banks already have mobile applications, and payments through these applications exceed 70 percent,” Kazimov explained.

“We also note significant development in the insurance sector and digitalization, and new infrastructure is being established. From the beginning of December, it will be possible to register securities online in the country," the CBA governor said.

He stressed that there is further potential for development.

"Various legislative acts are also expected to come into force. A new cybersecurity strategy is being prepared jointly with the international financial corporation," Kazimov added. 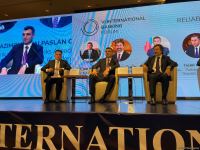