"The holding of the first such exhibition in brotherly Uzbekistan is no coincidence," he said. "Our countries have common roots. Undoubtedly, the personal friendships between Azerbaijani national leader Heydar Aliyev and Uzbek President Islam Karimov was a decisive condition for the success of this cooperation. It is gratifying that President Ilham Aliyev and Karimov have also developed the same friendly relations."

According to Mustafayev, regular reciprocal visits by Azerbaijani and Uzbek leaders, official delegations and businessmen result in agreements ensuring the development of multilateral ties.

"I would like to note with pleasure Uzbekistan's position on the issue of Armenian aggression against Azerbaijan, which was once again underscored by Karimov during Aliyev's visit to the country in September," he said.

According to Mustafayev, the two countries have a strong legal base.

"The sides signed bilateral agreements in various spheres, in particular an agreement to encourage and protect investments, avoid double taxation, and promote economic cooperation, free trade, and customs cooperation from for 2011-2015," Mustafayev said. "An intergovernmental commission was also established in 1997 and plays an important role in developing bilateral economic ties. A protocol signed following the commission's ninth session in Tashkent on Sept. 2 reflected an agreement on various areas of bilateral relations. I believe that both sides will take the necessary measures to resolve the issues under this protocol."

He also added that trade relations are an important area of cooperation between the countries.

"The total trade turnover grew by 23 percent, including exports by 2.2 times, in January-September compared to the same period last year," Mustafayev said. "However, it should be noted that the volume of mutual trade and economic ties as a whole has not matched the level of political cooperation between our countries, and there is great potential for further development. Based on this need, during Aliyev's recent visit, the two leaders agreed to hold national exhibitions for both of our countries. I am very pleased that we were able to so quickly and promptly fulfill the tasks instructed by our presidents."

According to the official, the exhibition will show off 1,700 goods produced by some 170 Azerbaijani enterprises and companies, which have tremendous export opportunities.

"At today's show, you will have the opportunity to become acquainted with Azerbaijan's achievements during its independence," he said. "The exhibition will demonstrate the indicators of our achievements in socioeconomic development, energy, industry, communications and IT, transportation, agriculture, environment, tourism, culture, folk art, health, education, sports and other social spheres."

Mustafayev noted that the day when goods from Central Asia will be transported to Europe via the Baku-Tbilisi-Kars Railway, whose construction is well underway, is not far off.

"I am confident that the exhibition will make a significant contribution to the development of the comprehensive economic ties and cooperation between our two countries," he said. 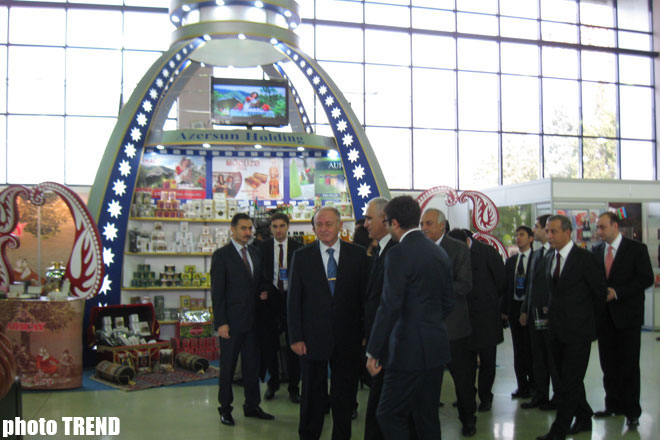