Chairman of the Standing Committee on International and Inter-Parliamentary Relations of the Azerbaijani Parliament Samad Seyidov, has arrived in Israel to participate in events dedicated to the Days of Azerbaijan in this country, the Israel -Azerbaijan Association said today.

The events were organised by the Israel -Azerbaijan International Association and supported by the Heydar Aliyev Foundation and Israeli Foreign Ministry.

Seyidov held a meeting with Chairman of the Israel -Azerbaijan Inter-Parliamentary Commission Amnon Cohen and Knesset member from Shas ultra- religious party. The issues of inter-parliamentary relations were discussed. An agreement was reached to promote the idea of mutual visits by parliamentarians.

During the meeting, the parliamentarians discussed the possibility of collaboration between the two parliaments in such international organisations as the European Union and the European Parliament.

The Prime Minister expressed the hope that both sides will ensure their best efforts to further intensify the bilateral and multilateral relations and develop mutually beneficial cooperation. 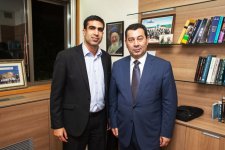