Monument to Heydar Aliyev should be raised in Moscow (PHOTO) A monument to Heydar Aliyev, big friend of the Russian people and Russia, should be erected in Moscow, said former officials of the Secretariat of First Deputy Chairman of the USSR Council of Ministers Heydar Aliyev

"Heydar Aliyev had always been big friend of the Russian people, his memory is alive, and his services to this country deserve that monument to him be erected in the centre of Moscow," former Deputy of the chairman of Secretariat of First Deputy Chairman of the USSR Council of Ministers Heydar Aliyev Vladimir Ukhov said at the press-conference on Thursday.

Visit of the former officials of Secretariat of First Deputy of Chairman of the Council of Ministers of USSR Heydar Aliyev (1982-1987) and ninth department of KGB of USSR to Baku was organized on the initiative of Vice President of the Heydar Aliyev Foundation Leyla Aliyeva.

The visit is organized by the Heydar Aliyev Foundation. The delegation includes heads of the Secretariat, assistants, attending medical doctor and deputy chief of security guard of Heydar Aliyev.

"It was my fortune to work with this great man and I always was impressed by charm of this striking person, goal and sense of whose life was creation," he said.

Great Azerbaijani leader Heydar Aliyev was a prominent state figure and politician of a world-scale, Eduard Prokhorenko, assistant to Heydar Aliyev, said. Speaking on close relations of Heydar Aliyev with his colleagues, Mr Prokhorenko described him as a kind, attentive, and very tactful man. "Heydar Aliyev never reproached people undeservedly but when he had to do it he did it as much tactfully as possible," he said.

"It is very difficult to appreciate at true value role that Heydar Aliyev played in the political and economic life of the former Union. As wise politician he was able to find constructive solutions in the most complicated situations," Yuri Solodukhin, former assistant to Heydar Aliyev, said.

He noted, Heydar Aliyev's activities were related to the common history of our people. "He laid foundation of cooperation between Russian and Azerbaijan and contributed greatly to strengthening friendship and mutual understanding between our countries," Mr Solodukhin said. 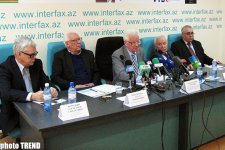