There is a huge potential between Azerbaijan and Croatia for expanding cooperation in all spheres, Ex-President of Croatia, member of the Nizami Ganjavi International Center Stjepan Mesic told Trend.

"Azerbaijan and Croatia have the political will and it is demonstrated at the level of the presidents of the two countries," Mesic added.

"Azerbaijan and Croatia are strategic partners, which allows building reliable and long-term relations between peoples," the ex-president said.

"Azerbaijan has restored its territorial integrity," Mesic added. "The most important issue after the war is the elimination of the factor of hatred of peoples."

"The policy of countries must be structured in such a way to eliminate this factor," the ex-president said. "Historically, there may be disagreements between certain countries, but the correct state policy can lead to peace."

"Each country has the right to liberate its territories," he said. "The Azerbaijani president is pursuing the fair and peaceful policy." 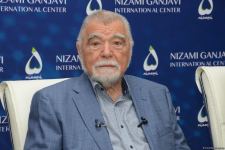