In May 8th, the International Day of Thalassemia, a team of ICB "Nikoil" held the traditional voluntary action on blood donation, dedicated to the 70th anniversary of the victory over fascism and the 92nd anniversary of national leader Heydar Aliyev. Employees in all branches of Baku city and the central office NIKOIL | Bank took part in this action. 62 employees in total, passed off about 13 liters of blood.

In February 2005, during the discussions about problems of thalassemia at the "round table", First Lady of Azerbaijan Mehriban Aliyeva called the public to assist the country in solving this global problem.

Moreover, for 10 years, the team of ICB "Nikoil", which can deservedly bear the title of honorary donor, regularly acting to help children suffering from thalassemia with donor campaigns. This tradition carried out twice a year, is implemented within the framework of corporate social responsibility of the bank.

ICB "Nikoil" - is a universal finance and credit institution offering a full package of services, including - credit, payments, plastic cards, guarantee, interbank, documentary and other transactions carried out in national and foreign currencies. Bank's branch network includes 21 point of sales, which are located both in Baku and in the regions of Azerbaijan. For information about all banking products, promotions and special offers can be obtained by calling the short number (012) 981. 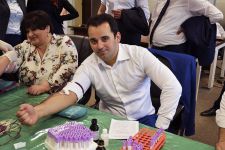