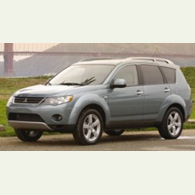 (autoinsidernews) - Mitsubishi Motors announced pricing for upcoming 2007 Outlander crossover SUV and at a glance pricing look to be extremely competitive for the class. The larger, more powerful 2007 Outlander will have a starting retail price of $21,370 for the ES front-wheel drive model, but early buyers will receive a Mitsubishi 25th Anniversary discount of $1,380 for a starting MSRP of $19,990. Pricing will climb to $25,010 for the top-of-the-line XLS with four-wheel drive.

This all-new second generation Outlander rides on the same platform as the upcoming Lancer, and is powered by 220-hp MIVEC V6 mated to a six-speed, manually-shiftable automatic. The 2007 Outlander is also offered as a P-ZEV in California where the V6 will be rated at 213-hp. Since it is based on the Lancer platform, the Outlander should have better handling than most crossovers, reports Trend.

Medicines export from Georgia to Azerbaijan down
Business 22 January 21:11
Latest