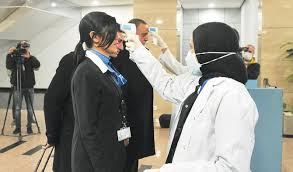 In Egypt’s bustling capital people pack shops, cafes and public transport, many of them disregarding the rules that they should wear face masks in these spaces and keep one metre apart, Trend reports with reference to Reuters.

Official warnings about a second wave of coronavirus infections are widely dismissed.

Egypt’s first wave of COVID-19 subsided in the summer and restrictions on movement were gradually relaxed. Up to now the population of more than 100 million appears to have been spared the surge in infections seen in European countries.

However, officially confirmed infections, which give a partial picture due to limited PCR testing and the exclusion of private test results, have risen slightly in recent days to about 350 daily cases, prompting the government to stress again the importance of mask wearing and social distancing.

They face an uphill battle.

“When the government opened things up, people stopped being disciplined. Everyone became careless,” said Alaa Adel, a 26-year-old engineer buying a mask in downtown Cairo after forgetting to bring one from home.

“Everyone keeps their mask in their pockets, and once the policeman comes by or if they stop at a checkpoint, they wear it.”

The Egyptian health ministry could not be reached for comment on enforcement of physical distancing and other protective measures.

In March, airports, hotels, malls and cafes all closed, paralysing the vital tourism and hospitality sectors. Some restrictions on opening hours and capacity remain in place. Egypt responded with a stimulus package of 100 billion Egyptian pounds ($6.4 billion) to support its economy, where most are employed informally.

In a cafe in Cairo’s Moqattam neighbourhood, capacity is at a fraction of normal level, but only about half of the customers wear masks and hardly any follow physical distancing rules, said owner Mohamed Sabry, adding he is reluctant to challenge them.

Despite the threat of 4,000 Egyptian pound ($255) fines for ignoring the rules, many in shops, public offices, buses and metro carriages still go bare-faced.

“People should be more disciplined. Most people don’t think about it, or do not understand how dangerous this disease is,” said a 45-year-old public servant Mohamed Mahmoud, one of the few customers wearing a mask at a café in downtown Cairo.