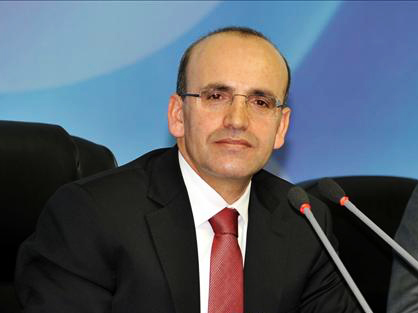 Mehmet Simsek was speaking at an international G20 tax event in Istanbul on Thursday where he said that the global economy needs a healthier system for taxation transparency.

The symposium has brought 300 high-profile delegates from 60 countries together to discuss the current rules and to fight international tax evasion.

Stating that the world is getting smaller day-by-day, Simsek said: "Today the world is a global village. Ten years ago, there were only 5,000 multinational companies doing business in Turkey, but today that figure has reached 42,000."

Simsek also claimed that taxation "is a vital issue, particularly for developing and undeveloped countries.

Those countries lose a very valuable economy due to tax evasion. Indeed, the lost economy could be used for health, education or research and development projects."

According to a 2011 World Bank report, governments around the globe lost more than $3.1 trillion in annual revenue due to tax evasion.

The size of the shadow economy has been a challenge also for the Turkish government.

However, Turkey is still in fourth place in terms of the size of its shadow economy among developed countries who are members of the Organization for Economic Co-operation and Development (OECD).

The World Bank says the informal economy in Turkey is not much larger in size than the average of the European Union nations, where it is 18.6 percent of GDP. In Greece, the shadow economy is 24 percent of GDP; in Germany it is 13 percent.

Praising the OECD's Base Erosion and Profit Shifting (BEPS) Project, which aims to tackle aggressive practices which erode the tax base of companies and artificially shift profits to low or no-tax jurisdictions, Simsek said:

BEPS was adopted at the July 2013 Ministerial Council Meeting at the request of G20 finance ministers.

The project is designed to close the gaps which can be exploited by companies to avoid taxation in their home countries by pushing activities abroad to low- or no-tax jurisdictions, while undermining the fairness and integrity of tax systems.

Masatsugu Asakawa, chair of the OECD's Committee on Fiscal Affairs said that the OECD, IMF, World Bank and United Nations have been cooperating on tax transparency.

"Taxation is really a significant issue. [...] We are working to provide a common method to fight against tax evasion," he said.

The symposium will last until Friday.